The Cross Border Network for Justice and Solidarity is a
grassroots organization based in Kansas City which recognizes
the common interests of working people in the world and
builds ties for common action among them.

Donate / Donar
Our Mission
​The Cross Border Network for Justice & Solidarity educates about the imperialist policies of the U.S. and their effect on countries in Latin America and the Caribbean. We challenge Americans to recognize that corporate-driven globalization and militarism are major forces driving migration. We organize for human rights and economic justice by connecting working people and their families in solidarity across borders.
We support workers across borders and who cross borders!

U.S.-CANADIAN HUMAN RIGHTS DELEGATION INSIDE U.S. EMBASSY DURING ALERT OVER BURNING TIRES. WE DEMAND A VOICE AGAINST CORRUPT HONDURAN GOVERNMENT RATHER THAN CALLING FOR CRIMINALIZION OF PROTESTING YOUTH
A group of fifteen American and Canadian citizens traveled to Honduras this past week to investigate why thousands of Hondurans are fleeing their home country. On Friday June 1st, we met with U.S. Embassy representatives Dana Deree – Consul General and Acting Charge’ d’Affaires, and Nate Rettenmayer – Human Rights and Migration Officer, on the topic of migration and ongoing human rights abuses.
During our meeting, protesters outside the embassy set fire to a stack of tires at the entrance of the building. The embassy went into full alert. Sirens blared and speakers bellowed: “Duck and cover!” Our delegation was required to remain in the conference room, then the hall, until we were escorted out by a helmeted soldier. At no time, however, did any of us feel that we were in any danger. When we emerged, we found our Honduran friend who was waiting for us with eyes were streaming from tear gas and three kinds of Honduran police.
Subsequently the Consular Section cancelled all visa interviews for a week, stating it was “Due to the damage done by these criminals.” Almost immediately, the Honduran government arrested Rommel Valdemar Herrera Portillo, a 23-year-old activist, son of two teachers, and charged him with aggravated arson and property damage and shipped him off to the La Tolva maximum security prison.
As U.S. and Canadian citizens, we are appalled, and we protest. First because it now appears the whole incident was a setup. Unknown agents diverted a march headed for a Honduran human rights office to the embassy grounds where unknown parties had conveniently positioned the tires. Second the La Tolva prison is a U.S.-style hellhole where political prisoners Edwin Espinal and Raul Alvarez, are awaiting trial since January 2018 for property damage caused during a demonstration against electoral fraud. They, along with Herrera now are housed alongside convicted violent criminals. On a visit the previous day to La Tolva we witnessed multiple instances of cruel and unusual punishment. Third, we can’t help but notice that the U.S. refused to protect the Venezuelan Embassy in Washington D.C. from attacks by the Juan Guaido forces, thus violating both Venezuelan sovereignty and the Vienna Convention. However, in Tegucigalpa the Embassy’s own private security forces lounged in the courtyard at a picnic table inside while Honduran police conveniently absented themselves on the outside just as the demonstrators were tricked into marching to the Embassy. Yet the Embassy issues a statement calling protesters criminals for throwing tires on a fire set by provocateurs.
Surely we don’t like or approve of property damage, but we are concerned that protesters involved in damaging property get prosecuted while police and military who kill protesters don’t even get investigated. We think using live ammunition to shoot down dozens of protestors in the streets, as the Hernandez government did after the 2017 election fraud, and throwing them away into inhumane prisons is far worse than burning some tires, and we expect our government to think so too and do something about it.
Background
Protests are growing nation-wide against the privatization of healthcare and education and the increasing illegitimacy of the Juan Orlando Hernandez regime. As our group traveled from San Pedro Sula in the North to near Danli in the Southeast we saw marches, highway blockages, and burning tires just about everywhere we went. Honduras is increasingly torn apart by a government that provides not a shred of public accountability and is corrupt from the Presidency down to small town mayors. In our investigation we found not, as President Trump declares, that criminals are leaving Honduras for the U.S. Rather, that people leave so that they will not be forced to become criminals or be killed for refusing. Youth, like Herrera, protest the injustice and are criminalized in a system that no longer offers them any future.
In the privatization standoff, the U.S. is calling for dialogue with military assassins and drug traffickers. Last week the New York Times reported that President Hernandez is under investigation for drug trafficking as his brother awaits trial for the same. People are fleeing for their lives but Consul Deree said a major reason they leave is “climate change.” We wonder if Trump would agree.
The Cross Border Network is a Kansas City based non-profit that supports human rights of immigrants and across borders. 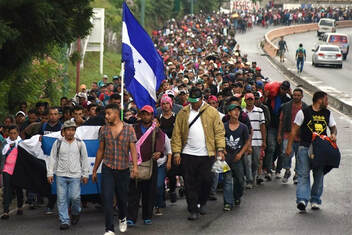 Honduras: The Roots of Migration

A Delegation Sponsored by the Cross Border Network, IFCLA and Task Force on the Americas
May 25-June 2, 2019 ​